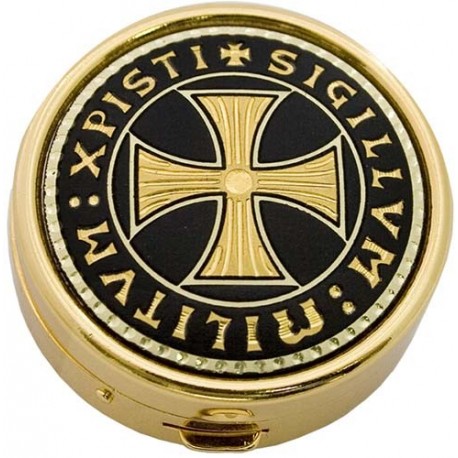 This product is no longer in stock

The Damascene Templar Cross Pill Box by Marto of Toledo Spain is decorated with 24K Gold damascene artwork. It features the Vichiers' (Renaud de Vichiers was the 19th Grand Master of the Knights Templar, from 1250 to 1256) seal: SIGILLUM MILITUM XPISTI. Although the phrase is written using the Latin alphabet, the first two letters of Christ's name are the Greek XP (Chi Rho) rather than the Latin CHR. The XP symbol's origin lies in the early roots of Christianity, but came into popular use after the Emperor Constantine had a vision of it and, according to legend, converted to Christianity in the early fourth century. From the time of Constantine, it became one of the most significant symbols of Christianity, surpassed only by the cross itself. Its early associations with the military made it the more apt of the two symbols for the Templars. In fact the Chi Rho can also be seen on the shields of the knights.  Another useful collectible item essential for all the fans of this famous order.

Be the first to write your review!